Note – if you’re using NiFi 1.8+, this post is no longer up to date. It is useful to understand how NiFi works but things have changed a bit. Have a look here.

I do see a lot of questions about how is working the List[X]/Fetch[X] processors and how to load balance the data over the nodes of a NiFi cluster once the data is already in the cluster. Since the question comes up quite often, let’s discuss the subject and let’s try to understand how things are working here.

The first thing to understand is: when running a cluster, one of the node is randomly designated as the “Primary node”. The election takes place when the cluster starts, and there is no way to decide which node will be the primary node. OK… you could force things when your cluster starts but there is no point to do such a thing if you want real high availability. So short line is: all nodes may have to be the Primary node at one point and don’t assume that the Primary node will be a given node in particular.

Second thing to understand is: the flow that you are designing on your canvas is running on all the nodes independently. Each node of the cluster is responsible of its own data and a relationship between two processors does not mean that the data going into this relationship will be balanced over the nodes. Unless you use a Remote Process Group (see below) the data will remain on the same node from the beginning to the end of the flow.

I will use a the following example to illustrate my explanations: I want to get files from a remote SFTP server and put the files into HDFS.

The first option could be the pattern Get/Put which is perfectly fine with a standalone instance. However this will cause issues if you have a NiFi cluster. Remember? The flow is running on all hosts of your cluster. Problem is that you will have concurrent accesses from your nodes to the same files on the SFTP server… and if the processor is configured to delete the file once retrieved (default behavior) you will have errors showing up. Conclusion: always have in mind that a processor is running on all the nodes and can cause concurrent access errors depending on the remote system.

The second option is to configure the GetSFTP processor to only run on the Primary Node (in the Scheduling tab of the processor configuration):

This way, you will solve the concurrent accesses since only one node of your cluster (the Primary node) will run the GetSFTP processor.

With this approach the problem is that it’s not efficient at all. First reason is that you get data from only one node (this does not scale at all), and, in the end, only the primary node of your cluster is actually handling the data. Why? Because, unless you explicitly use a remote process group, the data will remain on the same node from the beginning to the end. In this case, only the primary node will actually get data from SFTP server and push it into HDFS.

Obviously the List processor is meant to be run on the Primary node only. Then you have to balance the generated flow files over the nodes so that the Fetch processor on each node is dealing with flow files. For this purpose you have to use a Remote Process Group.

In the case of our SFTP example, it looks like:

Let’s try to understand what is going on from a cluster perspective. Here is what we have in the case of a 3-nodes NiFi cluster with ListSFTP running on the primary node only:

The ListSFTP when scheduled is going to list the three files on my remote SFTP server and will generate one flow file for each remote file. Each flow file won’t have any content but will have attributes with metadata of the remote files. In the case of ListSFTP, I’ll have (check the documentation at the “Write attributes” paragraph):

The ListSFTP processor will generate 3 flow files and, for now, all flow files are only on the primary node: 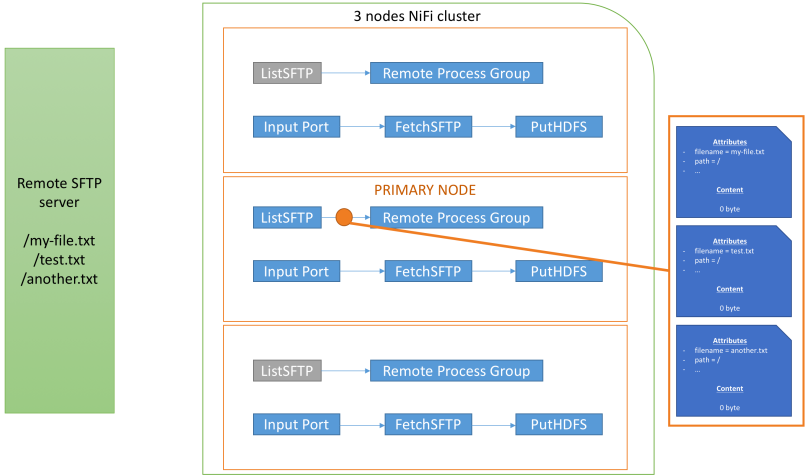 Note: that would be an ideal case in terms of balancing but, for efficiency purpose, the Site-to-Site mechanism might send batch of flow files to the remote node. In the above example, with only 3 flow files, I would probably not end up with one flow file per node.

This way, each instance of the FetchSFTP processor will take care of its own file (to actually fetch the content of the remote data) and there won’t be any concurrent access:

All your nodes are retrieving data and you really can scale up your cluster depending on your requirements. Note also that the PutHDFS won’t be an issue neither since each node will write its own file.

As I said previously a lot of processors are embracing this pattern (and this is recommended way to use such processors with a NiFi cluster), and I’d strongly encourage you to do the same when developing your custom processors.

As always questions/comments are welcome.

This site uses Akismet to reduce spam. Learn how your comment data is processed.